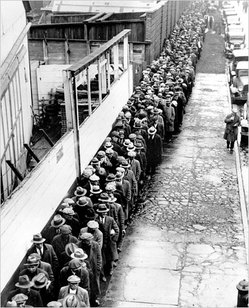 “Men lining up for free dinner in New York in the early days of the Great Depression.” Source of caption and photo: online version of the NYT article quoted and cited below.

(p. C1) In this interpretation Roosevelt is a well-meaning but misguided dupe who not only prolonged the Depression but also exacerbated it.
. . .
Amity Shlaes, a syndicated columnist who works at the Council on Foreign Relations, helped ignite this latest revisionist spurt with her 2007 book, “The Forgotten Man: A New History of the Great Depression.”
“The deepest problem was the intervention, the lack of faith in the marketplace,” she wrote, lumping Herbert Hoover and Roosevelt together as overzealous government meddlers.
. . .
(p. C7) Nonetheless, they argue that most of his mucking about in the economy crowded out private investment and antagonized the business world, and thus delayed recovery.
Unemployment remained high throughout the decade until World War II, Ms. Shlaes told conference attendees, because the uncertainty created by Roosevelt’s continual tinkering paralyzed private investors.
When the federal government keeps changing the rules, it’s like having Darth Vader in control, John H. Cochrane, a professor of finance at the University of Chicago Booth School of Business, said during a panel. “I have changed the deal,” he intoned like Vader, the “Star Wars” villain. “Pray I don’t change it any further.”
. . .
“No episode in American history has been so misinterpreted as the Great Depression,” declared Richard K. Vedder, an economist at Ohio University. By artificially keeping prices and wages high, he argued, both Hoover and Roosevelt prevented the economy from adjusting, which is why unemployment remained in double digits until the United States entered the war.
Anna Schwartz, who collaborated with Milton Friedman on a classic study of the Depression, and the Nobel Prize winner Robert E. Lucas Jr. argued that the idea of stimulating the economy with federal spending is a fairy tale. Government spending just crowds out private investment, they asserted; the money supply is the only thing that matters.
. . .
At the final panel, a questioner asked at what point on the 1930s timeline is the United States right now.
. . .
To Ms. Shlaes, the best analogy is 1937 — “the depression within the Depression” — when the unemployment rate shot back up to the middle and high teens after falling. “The economy wanted to recover,” she said, but the government’s interventions ended up paralyzing the business world.
. . .
Mr. Vedder playfully offered another analogy: the recession of 1920. Why was that slump, over and done with by 1922, so much shorter than the following decade’s? Well, for starters, he said, President Woodrow Wilson suffered an incapacitating stroke at the end of 1919, while his successor, Warren G. Harding, universally considered one of the worst presidents in American history, preferred drinking, playing poker and golf, and womanizing, to governing. “So nothing happened,” Mr. Vedder said.
Of course Mr. Vedder does not wish ill health — or obliviousness — on any chief executive. Still, in his view, when you’re talking about government intervention in the economy, doing nothing is about the best you can hope for from any president.

The full reference on on Shlaes’ excellent book, is:
Shlaes, Amity. The Forgotten Man: A New History of the Great Depression. New York: HarperCollins, 2007.