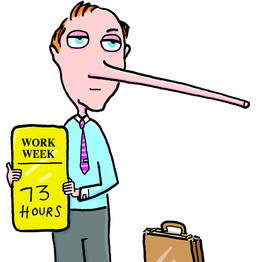 Source of caricature: online version of the WSJ article quoted and cited below.

(p. W13) Sociologists have been studying how Americans spend their time for decades. One camp favors a simple approach: if you want to know how many hours someone works, sleeps or vacuums, you ask him. Another camp sees a flaw in this method: People lie. We may not do so maliciously, but it’s tough to remember our exact workweek or average time spent dishwashing, and in the absence of concrete memories, we’re prone to lie in ways that don’t disappear into the randomness of thousands of answers. They actually skew results.

That’s the theory behind the American Time Use Survey, conducted annually by the Bureau of Labor Statistics. The ATUS, like a handful of previous academic surveys, is a “time diary” study. For these studies, researchers either walk respondents through the previous day, asking them what they did next and reminding them of the realities of time and physics, or in some cases giving them a diary to record the next day or week.
Time-diary studies are laborious, but in general they are more accurate. Aggregated, they paint a different picture of life than the quick-response surveys featured in the bulk of America’s press releases. For instance, the National Sleep Foundation claims that Americans sleep 6.7 hours (weekdays) to 7.1 hours (weekends) per night. The ATUS puts the average at 8.6 hours. The first number suggests rampant sleep deprivation. The latter? Happy campers.
The numbers are equally striking with work. Back in the 1990s, using 1985 data, researchers John Robinson and his colleagues compared people’s estimated workweeks with time-diary hours. They found that, on average, people claiming to work 40 to 44 hours per week were working 36.2 hours — not far off. But then, as estimated work hours rose, reality and perception diverged more sharply. You can guess in which direction. Those claiming to work 60- to 64-hour weeks actually averaged 44.2 hours. Those claiming 65- to 74-hour workweeks logged 52.8 hours, and those claiming workweeks of 75 hours or more worked, on average, 54.9 hours. I contacted Prof. Robinson recently to ask for an update. His 2006-07 comparisons were tighter — but, still, people claiming to work 60 to 69 hours per week clocked, on average, 52.6 hours, while those claiming 70-, 80-hour or greater weeks logged 58.8. As Mr. Robinson and co-author Geoffrey Godbey wrote in their 1997 book “Time for Life,” “only rare individuals put in more than a 55-60 hour workweek.”

(p. 305) Entrepreneurs understand the inexorable reality of risk and change. They begin by saving, forgoing consumption, not to create an ersatz security but to gain the wherewithal for a life of productive risks and opportunities. Their chief desire is not money to waste on consumption but the freedom and power to consummate their entrepreneurial ideas.

(p. W13) With each passing week that the assault against global capitalism continues in Washington, I become more nostalgic for one missing voice: Milton Friedman’s. No one could slice and dice the sophistry of government market interventions better than Milton, who died at the age of 94 in 2006. Imagine what the great economist would have to say about the U.S. Treasury owning and operating several car brands or managing the health-care industry. “Why not?” I can almost hear him ask cheerfully. “After all, they’ve done such a wonderful job delivering the mail.”
. . .
I’ve been thinking a lot lately of one of my last conversations with Milton, who warned that “even though socialism is a discredited economic model and capitalism is raising living standards to new heights, the left intellectuals continue to push for bigger government everywhere I look.” He predicted that people would be seduced by collectivist ideas again.
. . .
A few scholars are now properly celebrating the Friedman legacy. Andrei Shleifer, a Harvard economics professor, has just published a tribute to Friedman in the Journal of Economic Literature. He describes the period 1980-2005 as “The Age of Milton Friedman,” an era that “witnessed remarkable progress of mankind. As the world embraced free market policies, living standards rose sharply while life expectancy, educational attainment, and democracy improved and absolute poverty declined.”

(p. A13) The Patent Office now gets some 500 million applications a year, leading to litigation costs of over $10 billion a year to define who has what rights. As Judge Richard Posner has written, patents for ideas create the risk of “enormous monopoly power (imagine if the first person to think up the auction had been able to patent it).” Studies indicate that aside from the chemical and pharmaceutical industries, the cost of litigation now exceeds the profits companies generate from licensing patents. 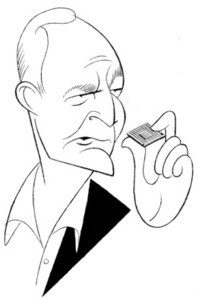 (p. A9) Craig Barrett is spending the last days of his tenure as Intel chairman the same way he spent his previous 35 years at the corporation: moving at a superhuman pace that leaves exhausted subordinates in his wake.

Mr. Barrett has maintained this lifestyle since he replaced Andrew Grove as CEO of Intel in 1998. “Was it hard to follow a legend?” he asks himself in his typical blunt way, adding, “What do you think?” Mr. Barrett barely broke pace when he became chairman in 2005, and shows no sign of slowing even now, at age 69, as he faces retirement.
. . .
The latest thing that has him animated is the record $1.45 billion antitrust fine levied against Intel by the European Union this week. Mr. Barrett shakes his head and says, “The antitrust rules and regulations seem designed for a different era. When you look at high-tech companies, with the high R&D budgets, specialization and market creation they need to hold their big market shares, it’s so very different from the old world of oil companies and auto makers that the antitrust regulations were designed for. They are out of sync with reality.
“And how do you reconcile European regulators, who don’t believe that any company should have more than 50% market share — even a market that company created — with the way we operate here? Of course, now it seems as if our Justice Department is preparing to march in lock-step behind Europe. In the end, all they are going to do is create barriers to companies growing, entering into new markets, and bringing new technologies into those markets. And when we stop being the land of opportunity, all of those smart immigrant kids getting their Ph.D.s here are going to start heading home after they graduate. Then watch what happens to our competitiveness.”

(p. 298) David L. Birch and his associates at MIT gained a glimpse of this topsy-turvy domain during the late 1970s when they themselves entered the statistical skunkworks of the economy by conducting the most comprehensive and detailed analysis ever performed on the facts of American small business. Using records from a Dun & Bradstreet sample of 5.6 million firms, the Birch team reached the highly publicized conclusion that companies with fewer than 100 employees created 80 percent of the net new jobs in the U.S. economy during the 1970s. Data from the early 1980s confirmed these findings. In launching jobs, the last were manifestly first in U.S. capitalism.

(p. B1) Big pharmaceutical companies have spent billions of dollars to buy other drug giants lately, leaving behind small biotech companies that can no longer find investors.

The biotech industry had thrived as a new-drug incubator for big pharma companies, which poured money into acquisitions and partnerships to build up their biotech-drug product line. Some of that is still happening, but most sources of investment funding have dried up in recent months.
Since November, 10 biotechs have declared bankruptcy, says Ellen Dadisman, a spokeswoman for the Biotechnology Industry Organization. Meanwhile, 120 of the 360 publicly traded biotechs have less than six months of cash left, compared with just 12 companies in that position a year ago, according to Burrill & Co., a venture-capital concern in San Francisco that follows the industry.