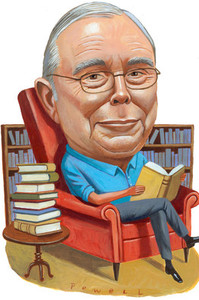 “BOOK VALUE: Berkshire Hathaway’s Charles Munger reads businesses well — and, as a bibliophile, he goes through several books a week.” Source of caricature and caption: online version of the WSJ article quoted and cited below.

At a Berkshire Hathaway annual meeting a few years ago, I remember hearing Warren Buffett say that he stays away from technology stocks because he does not know how to judge which technologies are likely to succeed in the long-run. So I was a bit puzzled by the news that Berkshire Hathaway was investing in BYD, a Chinese company producing an electric car.
The passages quoted below may partially solve the puzzle: the investment in BYD was pushed by Charlie Munger and David Sokol, and was based more on a judgment about the quality of BYD’s management, than the prospects for BYD’s technology.

A Chinese tech company is nothing like the shoe and underwear makers Berkshire had been buying. But Mr. Munger was enthusiastic, less about the technology than about Wang Chuanfu, who runs BYD. Mr. Wang, Mr. Munger says, is “likely to be one of the most important business people who ever lived.”
Mr. Buffett was skeptical at first. But Mr. Munger persisted. David Sokol, chairman of Berkshire utility MidAmerican Energy Holdings Co., paid a visit to BYD’s factory in China and agreed with Mr. Munger’s assessment. Last year, MidAmerican paid $230 million for a 10% stake in BYD.
“BYD was Charlie’s idea,” Mr. Buffett said. “When he encounters genius and sees it operating in a practical way, he gets blown away.”