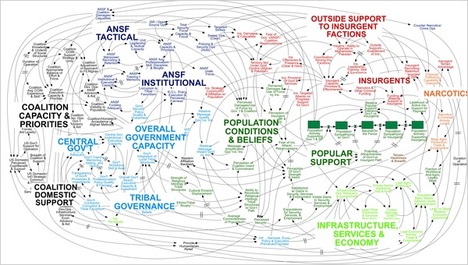 “A PowerPoint diagram meant to portray the complexity of American strategy in Afghanistan certainly succeeded in that aim.” Source of caption and graphic: online version of the NYT article quoted and cited below.

(p. A1) WASHINGTON — Gen. Stanley A. McChrystal, the leader of American and NATO forces in Afghanistan, was shown a PowerPoint slide in Kabul last summer that was meant to portray the complexity of American military strategy, but looked more like a bowl of spaghetti.

“When we understand that slide, we’ll have won the war,” General McChrystal dryly remarked, one of his advisers recalled, as the room erupted in laughter.
The slide has since bounced around the Internet as an example of a military tool that has spun out of control. Like an insurgency, PowerPoint has crept into the daily lives of military commanders and reached the level of near obsession. The amount of time expended on PowerPoint, the Microsoft presentation program of computer-generated charts, graphs and bullet points, has made it a running joke in the Pentagon and in Iraq and Afghanistan.
“PowerPoint makes us stupid,” Gen. James N. Mattis of the Marine Corps, the Joint Forces commander, said this month at a military conference in North Carolina. (He spoke without PowerPoint.) Brig. Gen. H. R. McMaster, who banned PowerPoint presentations when he led the successful effort to secure the northern Iraqi city of Tal Afar in 2005, followed up at the same conference by likening PowerPoint to an internal threat.
“It’s dangerous because it can create the illusion of understanding and the illusion of control,” General McMaster said in a telephone interview afterward. “Some problems in the world are not bullet-izable.”
. . .
(p. A8) Gen. David H. Petraeus, who oversees the wars in Iraq and Afghanistan and says that sitting through some PowerPoint briefings is “just agony,” nonetheless likes the program for the display of maps and statistics showing trends. He has also conducted more than a few PowerPoint presentations himself.
. . .
Senior officers say the program does come in handy when the goal is not imparting information, as in briefings for reporters.
The news media sessions often last 25 minutes, with 5 minutes left at the end for questions from anyone still awake. Those types of PowerPoint presentations, Dr. Hammes said, are known as “hypnotizing chickens.”

An interesting, but overdone critique of PowerPoint by an intelligent expert on graphics is:
Tufte, Edward R. The Cognitive Style of PowerPoint. Cheshire, CT: Graphics Press, 2003.