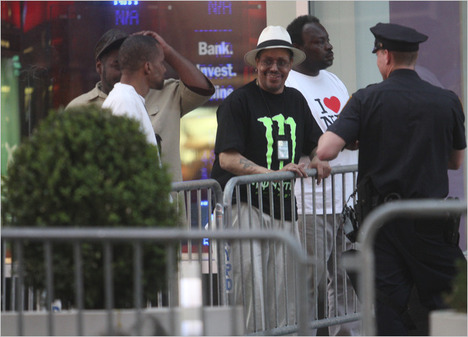 “Lance Orton, center, who sells T-shirts, said that as a veteran he was proud of his actions. But he spurned most questions.” Source of caption and photo: online version of the NYT article quoted and cited below.

Hernando de Soto has shown that entrepreneurial street-vending is an important path for the very poor to constructively improve their lives. And yet governments around the world, including ours, consistently make it hard for street vendors to ply their trade.
Yet, on balance, street vendors make our lives better, not only through their products and services, but also through their alert eyes that make our city streets safer. Jane Jacobs made the point that the presence of good people observing the streets is a key ingredient of urban safety, one that was too-often removed by well-intentioned, but ill-conceived city-planners’ urban-renewal projects.
The incident recounted below also adds one more case to the well-documented conclusions of Amanda Ripley, who showed us that our safety in avoiding and being rescued from disasters rests in the alertness, preparation, level-headedness and good will of ordinary citizens on the scene.
There may be professionals who are better trained, but outcomes often depend on what is done quickly, and usually only those who are on the scene are able to act quickly.
And although the politically correct will glower at you for mentioning it, there are obvious implications for the issue of gun control.

(p. A19) Even in Times Square, where little seems unusual, the Nissan Pathfinder parked just off Broadway on the south side of 45th Street — engine running, hazard lights flashing, driver nowhere to be found — looked suspicious to the sidewalk vendors who regularly work this area.

And it was the keen eyes of at least two of them — both disabled Vietnam War veterans who say they are accustomed to alerting local police officers to pickpockets and hustlers — that helped point the authorities to the Pathfinder, illegally and unusually parked next to their merchandise of inexpensive handbags and $2.99 “I Love NY” T-shirts.
Shortly before 6:30 p.m. on Saturday, the vendors — Lance Orton and Duane Jackson, who both served during the Vietnam War and now rely on special sidewalk vending privileges for disabled veterans — said they told nearby officers about the Pathfinder, which had begun filling with smoke and then emitted sparks and popping sounds.
. . .
But in a city hungry for heroes, the spotlight first turned to the vendors. Mr. Orton, a purveyor of T-shirts, ran from the limelight early Sunday morning as he spurned reporters’ questions while gathering his merchandise on a table near where the Pathfinder was parked.
When asked if he was proud of his actions, Mr. Orton, who said he had been selling on the street for about 20 years, replied: “Of course, man. I’m a veteran. What do you think?”
Mr. Jackson, on the other hand, embraced his newfound celebrity, receiving an endless line of people congratulating him while he sold cheap handbags, watches and pashmina scarves all day Sunday.
. . .
As for Mr. Orton, he rested on Sunday at a relative’s house, leaving others to talk on his behalf. “When he was in Vietnam, he said they had to make decisions and judgments from their gut, from their own feelings,” said Miriam Cintron, the mother of Mr. Orton’s son. “His instinct was telling him something’s not right. I guess he was right.”
She said Mr. Orton would mediate disputes between the police and other vendors, and when something did not look right, he would alert the police. “He always said, ‘Downtown is where they’re going to come to, and I’m going to be right there,’ ” Ms. Cintron said.
When Mr. Orton left Times Square about 7 a.m. on Sunday, he did so to a hero’s reception. As he walked down the street, employees from Junior’s restaurant stood outside applauding him. He briefly entered the restaurant before heading toward 44th Street.
Using a cane and wearing a white fedora, Mr. Orton limped away and hopped a cab home to the Bronx, but not before repeating a terror-watch mantra: “See something, say something.”

The most relevant Hernando de Soto book is:
Soto, Hernando de. The Other Path: The Invisible Revolution in the Third World. New York: Basic Books, 1989.

The Amanda Ripley book mentioned is:
Ripley, Amanda. The Unthinkable: Who Survives When Disaster Strikes – and Why. New York: Crown Publishers, 2008.