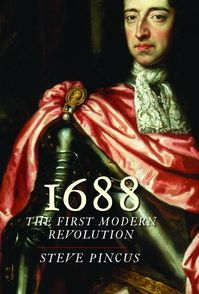 (p. A15) Samuel Pufendorf, a 17th-century German historian, described the English people as “having been ­always inclined to rebellion and intestine commotion.” But England’s regime change in 1688–soon called “glorious”–was a revolution with a difference. Instead of overthrowing the existing order in violent upheaval, it put “government upon its ancient and proper basis, which the measures of a mad bigot had almost ­destroyed.” The “mad bigot” was, in this case, James II, the Stuart king (and a Catholic) who was deposed in ­favor of William of Orange, a Protestant from the Dutch Republic. Edmund Burke famously contrasted England’s balance of change and continuity in 1688 with the ­ferocity in France a century later.

In “1688: The First Modern Revolution,” Steve Pincus challenges this received account to argue that the ­Glorious Revolution marked a much greater break with history than Burke realized–and proved to be an ­emblem of the West’s future. James II, Mr. Pincus notes, sought to extend state power at the expense of Parliament and the privileges of local communities. James’s adversaries preferred the dynamism of commerce; they believed that wealth sprang from the limitless striving of human endeavor rather than the finite availability of land. France under Louis XIV provided James with a pattern for absolutism; the Dutch Republic provided his opponents with a commercial ideal. The Glorious ­Revolution is often seen as a clash ­between ­”popery”–the term for authoritarian ­Catholicism–and ­ancient English liberties. But Mr. Pincus persuasively describes it as the collision of two ideas about the state in society. In a sense, he implies, we are all Dutchmen now.

For the full review, see:
WILLIAM ANTHONY HAY. “Going Dutch; When a dynamic commercial ideal won out over centralized power.” The Wall Street Journal (Tues., September 1, 2011): A15.
(Note: the online version of the review is dated AUGUST 31, 2009.)

An alternative view is presented in a a book by Lisa Jardine (reference below). She argues that William of Orange was more interested in grabbing power than in promoting liberty. Her view is persuasively disputed in the following review by Andrew Roberts:
ANDREW ROBERTS. “A New William The Conqueror.” The Wall Street Journal (Thurs., August 28, 2008): A13.