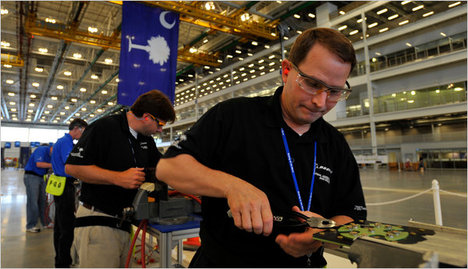 “Wayne Gravot, right, and Jeff Sparwasser at the new plant in North Charleston, S.C.” Source of caption and photo: online version of the NYT article quoted and cited below.

(p. A1) NORTH CHARLESTON, S.C. — Boeing’s gigantic new $750 million airplane factory here is the pride of South Carolina, the biggest single investment ever made in a state that is far more associated with old-line textile mills than state-of-the-art manufacturing. In just a few weeks, 1,000 workers will begin assembling the first of what they hope will be hundreds of 787 Dreamliners.

That is, unless the federal government takes it all away.
In a case that has enraged South Carolinians and become a cause célèbre among Republican lawmakers and presidential hopefuls, the National Labor Relations Board has accused Boeing of illegally setting up shop in South Carolina because of past strikes by the unionized workers at its main manufacturing base in the Seattle area. The board is asking a judge to order Boeing to move the Dreamliner production — and the associated jobs — to Washington State.