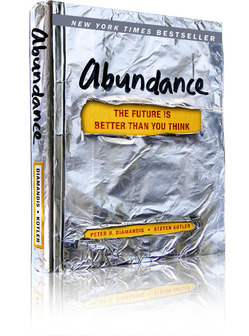 (p. 18) in Silicon Valley, where the locals tend to be too busy starting companies to wallow in gloom, Peter Diamandis has stood out as one of the more striking optimists. Several years ago, Diamandis founded the X Prize Foundation, which rewards entrepreneurs with cash for achieving difficult goals, like putting a reusable spaceship into flight on a limited budget. More recently he helped start Singularity University, an academic program that convenes several weeks a year in the Valley and educates business leaders about the “disruptive” — i.e., phenomenally innovative — technological changes Diamandis is anticipating. To be sure, Diamandis is both very bright (he studied molecular biology and aerospace engineering at M.I.T. before getting an M.D. at Harvard) and well informed. Moreover, he’s not the kind of optimist who will merely see the glass as half full. He’ll give you dozens of reasons, some highly technical, why it’s half full. Then he’ll explain that your cognitive biases are tricking you into seeing the glass of water in a negative light, and cart out the research of acclaimed psychologists like Daniel Kahne­man to prove his point. Finally he may suggest you stop fretting: new technologies will soon fill the glass up anyway. Indeed, they are likely to overfill it.
. . .
(p. 19) Throughout the book Diamandis . . . offers small groups of driven entrepreneurs as a kind of Leatherman solution to the world’s problems. It’s true that plenty of insurgents are doing impressive things out there — Elon Musk’s Tesla Motors, which helped jump-start the world’s electric car industry, is a good example.
. . .
. . . , there’s a significant idea embedded within “Abundance”: We should remain aware, as writers like Jared Diamond have likewise told us, that societies can choose their own future, and thus their own fate. In that spirit Diamandis and Kotler put forth a range of possible goals we may achieve if we have the imagination and the will. A little optimism wouldn’t hurt, either.

The book under review is:
Diamandis, Peter H., and Steven Kotler. Abundance: The Future Is Better Than You Think. New York: Free Press, 2012.

One thought on “Our Cups Will Runneth Over If We Choose Entrepreneurship, Imagination, Will and Optimism”