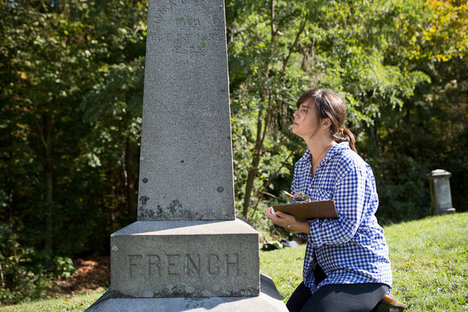 “ANNUAL VISITOR; For the last eight years, Anne Pringle of Harvard has been collecting data about the lichens on the gravestones at a cemetary in Petersham, Mass.” Source of caption and photo: online version of the NYT article quoted and cited below.

(p. D3) PETERSHAM, Mass. — On a sparkling New England afternoon, as hawks coasted overhead and yellow leaves drifted to the ground, Anne Pringle stood before a large granite obelisk that marked the graves of a family called French.
. . .
For eight years, Dr. Pringle, 42, has been returning to this cemetery each fall, to measure, sketch and scrutinize the lichens, which belong to the genus Xanthoparmelia. She wants to know whether they deteriorate with the passage of time, leaving them more susceptible to death.
. . .
Lichens are not individuals but tiny ecosystems, composed of one main fungus, a group of algae and an assortment of smaller fungi and bacteria.
. . .
While lichens are communities, Dr. Pringle is largely interested in the fungi. Mycologists, the scientists who study fungi — not the most glamorous corridor of biology — have long assumed that many of these organisms don’t age.
. . .
“What you know is based on the organisms you study,” she said. “What would you say about the evolution of senescence if instead of working with insects, you worked with modular organisms, which is what lichen are?”
Daniel Doak, a University of Colorado ecologist, agrees that the question is worth asking. Research like Dr. Pringle’s — along with other studies of species including the bristlecone pine tree and the wandering albatross, a bird, both of which may avoid senescence — suggests another possible path.
“It’s saying something fundamental,” Dr. Doak said, “that senescence is not an inevitable part of life. Which means there might be ways to prevent it.” That idea could eventually have implications for human medicine.
. . .
Dr. Pringle’s preliminary results show that as a lichen grows older and larger, it is less likely to die. “If you made me answer the question now,” she said, “I’d say there can be senescence of parts of an individual. But I don’t think an individual ever senesces.” 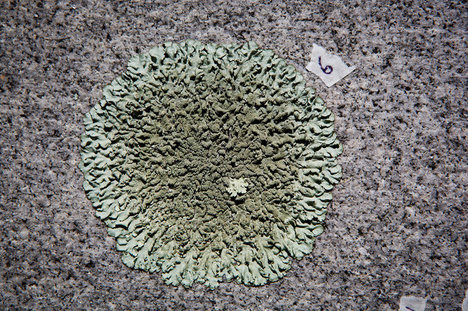 “THRIVING; Dr. Pringle’s initial results show that as a lichen grows older and larger, it is less likely to die.” Source of caption and photo: online version of the NYT article quoted and cited above.