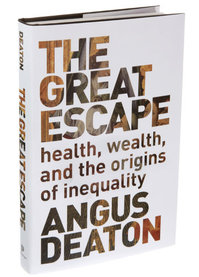 (p. 4) IN his new book, Angus Deaton, an expert’s expert on global poverty and foreign aid, puts his considerable reputation on the line and declares that foreign aid does more harm than good. It corrupts governments and rarely reaches the poor, he argues, and it is high time for the paternalistic West to step away and allow the developing world to solve its own problems.

It is a provocative and cogently argued claim. The only odd part is how it is made. It is tacked on as the concluding section of “The Great Escape: Health, Wealth, and the Origins of Inequality” (Princeton University Press, 360 pages), an illuminating and inspiring history of how mankind’s longevity and prosperity have soared to breathtaking heights in modern times.
. . .
THE author has found no credible evidence that foreign aid promotes economic growth; indeed, he says, signs show that the relationship is negative. Regretfully, he identifies a “central dilemma”: When the conditions for development are present, aid is not required. When they do not exist, aid is not useful and probably damaging.
Professor Deaton makes the case that foreign aid is antidemocratic because it frees local leaders from having to obtain the consent of the governed. “Western-led population control, often with the assistance of nondemocratic or well-rewarded recipient governments, is the most egregious example of antidemocratic and oppressive aid,” he writes. In its day, it seemed like a no-brainer. Yet the global population grew by four billion in half a century, and the vast majority of the seven billion people now on the planet live longer and more prosperous lives than their parents did.