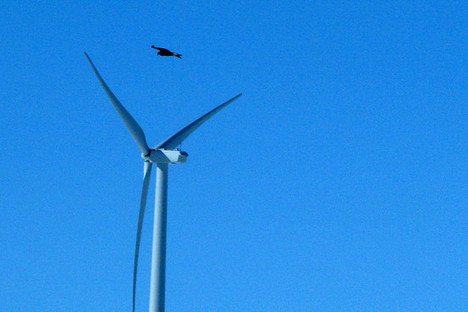 “A golden eagle flies over a wind turbine on Duke Energy’s wind farm in Converse County, Wyo.” Source of caption and photo: online version of the WSJ article quoted and cited below.

(p. A17) The Justice Department announced late . . . [in the week of Nov. 17-23] that a subsidiary of Duke Energy has agreed to pay $1 million for killing golden eagles and other federally protected birds at two of the company’s wind projects in Wyoming. The guilty plea was a long-overdue victory for the rule of law and a sign that green energy might be going out of vogue.

As Justice noted in its news release, this is the first time a case has been brought against a wind company for violating the Migratory Bird Treaty Act. The 1918 law makes it a federal crime to kill any bird of more than 1,000 different species. Over the past few decades, federal authorities have brought hundreds of cases against oil and gas companies for killing birds, while the wind industry has enjoyed a de facto exemption. By bringing criminal charges against Duke for killing 14 golden eagles and 149 other protected birds, Justice has ended the legal double standard on enforcement.

For the full commentary, see:
ROBERT BRYCE. “Wind Power Is Brought to Justice; Duke Energy’s guilty plea for killing protected birds is an ominous sign for renewable energy.” The Wall Street Journal (Fri., Nov. 29, 2013): A17.
(Note: ellipsis, and bracketed words, added.)
(Note: the online version of the commentary has the date Nov. 28, 2013.)