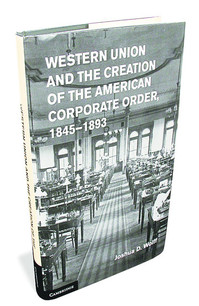 (p. A13) Until now there has been no full-scale, modern company history. Joshua D. Wolff’s “Western Union and the Creation of the American Corporate Order, 1845-1893” ably fills the bill, offering an exhaustive and yet fascinating account.
. . .
If people today remember anything about Western Union, it is that its coast-to-coast line put the Pony Express out of business and that its leaders didn’t see the telephone coming. Mr. Wolff tells us that neither claim is exactly true. It was Hiram Sibley, Western Union’s first president, who went out on his own, when his board balked, to form a separate company and build the transcontinental telegraph in 1861; he made his fortune by eventually selling it to Western Union. And the company was very aware of Alexander Graham Bell’s invention, patented in 1876, but history had supposedly shown that it wasn’t necessary to control a patent to win the technology war. The company’s third president, William Orton, was sure that Bell and his “toy” would not get the better of Western Union: “We would come along and take it away from him.” They didn’t.
. . .
Mr. Wolff contends that the company’s practices set the template for today’s “corporate triumphalism,” not least in the way Western Union bullied the makers of public policy into serving private capital. Perhaps, but telecom competition today is so ferocious and differently arranged from that of the late 19th century that a “triumphant” company today may be toast tomorrow–think of BlackBerry–and can’t purchase help with anything like Western’s Union’s brazenness and scope. Western Union had friends in Congress, the regulatory bureaucracy and the press. Members of the company’s board of directors chaired both the 1872 Republican and Democratic national conventions. It seemed that, whatever the battles in business, politics, technology or the courts, the company’s shareholders won.