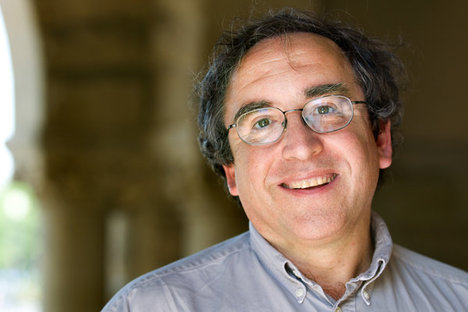 “Clifford Nass studied how new technology affected people.” Source of caption and photo: online version of the NYT obituary quoted and cited below.

(p. 27) Clifford Nass, a Stanford professor whose pioneering research into how humans interact with technology found that the increasingly screen-saturated, multitasking modern world was not nurturing the ability to concentrate, analyze or feel empathy, died on Nov. 2 near Lake Tahoe. He was 55.
. . .
One of his most publicized research projects was a 2009 study on multitasking.
. . .
“We all bet high multitaskers were going to be stars at something,” he said in an interview with the PBS program “Frontline.” “We were absolutely shocked. We all lost our bets. It turns out multitaskers are terrible at every aspect of multitasking. They’re terrible at ignoring irrelevant information; they’re terrible at keeping information in their head nicely and neatly organized; and they’re terrible at switching from one task to another.”
He added, “One would think that if people were bad at multitasking, they would stop. However, when we talk with the multitaskers, they seem to think they’re great at it and seem totally unfazed and totally able to do more and more and more.”
With children doing more multitasking and people asked to do more of it at work, he said, “We worry that it may be creating people who are unable to think well and clearly.”
. . .
Dr. Nass found that people who multitasked less frequently were actually better at it than those who did it frequently. He argued that heavy multitasking shortened attention spans and the ability to concentrate.

The famous study on multitasking that Nass authored is:
Ophir, Eyal, Clifford Nass, and Anthony D. Wagner. “Cognitive Control in Media Multitaskers.” Proceedings of the National Academy of Sciences (PNAS) 106, no. 37 (September 15, 2009): 15583-87.