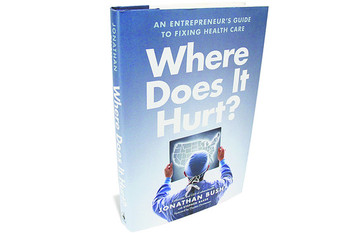 (p. A11) The rise in U.S. health-care costs, to nearly 18% of GDP today from around 6% of GDP in 1965, has alarmed journalists, inspired policy wonks and left patients struggling to find empathy in a system that tends to view them as “a vessel for billing codes,” as the technologist Dave Chase has put it.

Enter Jonathan Bush, dyslexic entrepreneur, . . .
. . .
. . . , Mr. Bush touts technology as a driver of change. It has revolutionized the way we shop for books and select hotels, but health-care delivery has been stubbornly resistant. Mr. Bush notes that the number of people supporting each doctor has climbed to 16 today from 10 in 1990–half of whom, currently, are administrators handling the mounting paperwork. Astonishingly, as Mr. Bush observes, the government had to pay doctors billions of dollars, via the 2009 HITECH Act, to incentivize them to upgrade from paper to computers. Meanwhile, fast-food chains discovered computers on their own, because the market demanded it.
. . .
Let entrepreneurs loose on these challenges, Mr. Bush believes, and they will come up with solutions.
Mr. Bush identifies three major obstacles to the kinds of change he has in mind. First, large hospital systems leverage their market position to charge hefty premiums for basic services, then use the proceeds to buy more regional hospitals and local practices. “As big ones take over the small,” Mr. Bush laments, “prices shoot up. Choices vanish.” Second, government regulations, especially state laws, favor powerful incumbents, shielding “imaging centers and hospitals from competition.” Third, heath care suffers from a risk-avoidant culture. The maxim “do no harm,” Mr. Bush says, should not be an excuse for clinging to a flawed status quo.

The book under review is:
Bush, Jonathan, and Stephen Baker. Where Does It Hurt?: An Entrepreneur’s Guide to Fixing Health Care. New York: Portfolio, 2014.