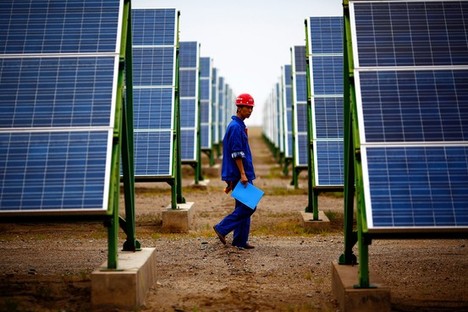 “A worker inspects solar panels in Dunhuang, China. We have an estimated supply of one million years of tellurium, a rare element used in some panels.” Source of caption and photo: online version of the WSJ article quoted and cited below.

(p. C1) How many times have you heard that we humans are “using up” the world’s resources, “running out” of oil, “reaching the limits” of the atmosphere’s capacity to cope with pollution or “approaching the carrying capacity” of the land’s ability to support a greater population? The assumption behind all such statements is that there is a fixed amount of stuff–metals, oil, clean air, land–and that we risk exhausting it through our consumption.
. . .
But here’s a peculiar feature of human history: We burst through such limits again and again. After all, as a Saudi oil minister once said, the Stone Age didn’t end for lack of stone.
. . .
Economists call the same phenomenon innovation. What frustrates them about ecologists is the latter’s tendency to think in terms of static limits. Ecologists can’t seem to see that when whale oil starts to run out, petroleum is discovered, or that when farm yields flatten, fertilizer comes along, or that when glass fiber is invented, demand for copper falls.
. . .
(p. C2) . . ., Mr. Ausubel, together with his colleagues Iddo Wernick and Paul Waggoner, came to the startling conclusion that, even with generous assumptions about population growth and growing affluence leading to greater demand for meat and other luxuries, and with ungenerous assumptions about future global yield improvements, we will need less farmland in 2050 than we needed in 2000. (So long, that is, as we don’t grow more biofuels on land that could be growing food.)
. . .
The economist and metals dealer Tim Worstall gives the example of tellurium, a key ingredient of some kinds of solar panels. Tellurium is one of the rarest elements in the Earth’s crust–one atom per billion. Will it soon run out? Mr. Worstall estimates that there are 120 million tons of it, or a million years’ supply altogether.
. . .
Part of the problem is that the word “consumption” means different things to the two tribes. Ecologists use it to mean “the act of using up a resource”; economists mean “the purchase of goods and services by the public” (both definitions taken from the Oxford dictionary).
But in what sense is water, tellurium or phosphorus “used up” when products made with them are bought by the public? They still exist in the objects themselves or in the environment. Water returns to the environment through sewage and can be reused. Phosphorus gets recycled through compost. Tellurium is in solar panels, which can be recycled. As the economist Thomas Sowell wrote in his 1980 book “Knowledge and Decisions,” “Although we speak loosely of ‘production,’ man neither creates nor destroys matter, but only transforms it.”
. . .
If I could have one wish for the Earth’s environment, it would be to bring together the two tribes–to convene a grand powwow of ecologists and economists. I would pose them this simple question and not let them leave the room until they had answered it: How can innovation improve the environment?