The notion that the FDA should “err on the side of safety” sounds like a tautology but is an affront to patients with incurable or poorly treatable diseases: For them, there is no safety in the status quo, and we only damage them further with paternalistic public policy that prevents individuals from exercising their own judgment about risks and benefits. If the FDA must err, it should be on the side of patients’ freedom to choose.

Yesterday (3/14) was “Pi Day.” Source of image: http://www.mathwithmrherte.com/pi_day.htm
After school yesterday, my daughter Jenny told me that in her sixth grade class with Barbara Jens, they had celebrated “Pi Day.” I didn’t get it until Jen pointed out that the date was 3/14 and the first three digits of pi are 3.14.
Being a hoosier by birth and upbringing, Pi Day reminded me that in 1897 the Indiana House of Representatives unanimously passed a bill legislating the wrong value of pi. It would make a better story if the House had taken this action based on a literal interpretation of the bible, which gives the value of pi as an even 3. But apparently the House action was based on a mistaken “proof” offered by physician Edwin J. Goodwin. Fortunately for the reputation of Indiana government, a mathematician visiting the state capitol for other reasons, convinced Senators of the mistake, and consideration of the bill was postponed indefinitely in the Senate, before it could become law.
For my source, and more details, see Petr Beckmann’s wonderful book:
Beckmann, Petr. A History of Pi. New York: St. Martin’s Press, 1971. 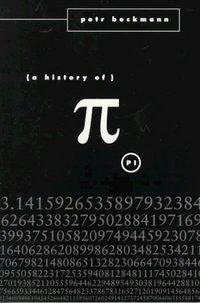 BRUSSELS — After French and Dutch voters killed the EU constitution last year, its framers fretted that Europe couldn’t function without their bloated document. That was always laughable. But driven by economic insecurity, those failed referendums, particularly in France, ended up calling into question the very foundation of the EU, a common and free market.
It didn’t take politicians long to take this message to heart. In recent weeks, the idea and reality of a single European market has come under threat. From France to Spain, from Luxembourg to Italy and even newcomer Poland, economic nationalism is gaining strength, evoking memories that the European project was created expressly to bury. Neelie Kroes, the EU’s competition commissioner, told me that these developments “risk taking Europe into a 1930s-style downward spiral of tit-for-tat protectionism.” This sensible Dutchwoman is not prone to hyperbole, and hardly alone in voicing the concern.
This winter, France made 11 sectors, from data security to (bizarrely) casinos, off limits to foreign buyers. And together with Luxembourg, Paris opposed a mooted merger between the world’s biggest steel companies, Mittal and Arcelor. (The protectionist furies so far haven’t managed to sink Mittal’s hostile bid.)
Prime Minister José Louis Rodríguez Zapatero also wants to keep the energy sector in Spanish hands. When Germany’s E.On moved to trump a rival Spanish bid from Gas Natural for the utility Endesa, Mr. Zapatero gave the regulator wider powers to block the takeover.
The most audacious national block was yet to come. Two weeks ago, France stepped in to stop Italy’s Enel from acquiring Suez by forcing through a shotgun wedding between the publicly owned Suez and state-owned Gaz de France. This tie-up epitomized Prime Minister Dominique de Villepin’s notion of “economic patriotism.” The Italians saw only economic protectionism, which the country’s central bank governor, Mario Draghi, said was “doomed to failure.” But Rome can’t easily claim the moral high ground, having shielded its banking sector for more than a decade.
The single market isn’t doing well on other fronts either. Last month, the European Parliament, with lawmakers following orders from their capitals, emasculated legislation that would have freed up the EU’s services market. A free market for services, by some estimates, would have added 0.7% to Europe’s GDP and created some 600,000 jobs.

VANCOUVER, British Columbia, Feb. 23 – The Cambie Surgery Center, Canada’s most prominent private hospital, may be considered a rogue enterprise.
Accepting money from patients for operations they would otherwise receive free of charge in a public hospital is technically prohibited in this country, even in cases where patients would wait months or even years before receiving treatment.
But no one is about to arrest Dr. Brian Day, who is president and medical director of the center, or any of the 120 doctors who work there. Public hospitals are sending him growing numbers of patients they are too busy to treat, and his center is advertising that patients do not have to wait to replace their aching knees.
The country’s publicly financed health insurance system — frequently described as the third rail of its political system and a core value of its national identity — is gradually breaking down. Private clinics are opening around the country by an estimated one a week, and private insurance companies are about to find a gold mine.
Dr. Day, for instance, is planning to open more private hospitals, first in Toronto and Ottawa, then in Montreal, Calgary and Edmonton. Ontario provincial officials are already threatening stiff fines. Dr. Day says he is eager to see them in court.
”We’ve taken the position that the law is illegal,” Dr. Day, 59, says. ”This is a country in which dogs can get a hip replacement in under a week and in which humans can wait two to three years.”
. . .
The median wait time between a referral by a family doctor and an appointment with a specialist has increased to 8.3 weeks last year from 3.7 weeks in 1993, according to a recent study by The Fraser Institute, a conservative research group. Meanwhile the median wait between an appointment with a specialist and treatment has increased to 9.4 weeks from 5.6 weeks over the same period.
Average wait times between referral by a family doctor and treatment range from 5.5 weeks for oncology to 40 weeks for orthopedic surgery, according to the study. 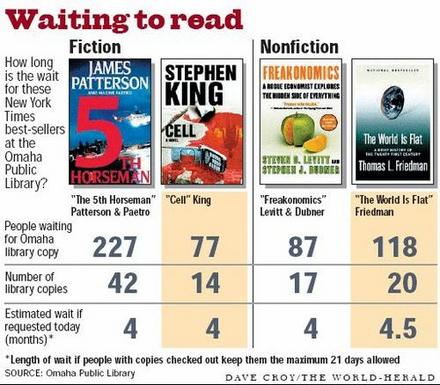 Source of the graphic is page 1 of: MICHAEL O’CONNOR. “Library may help turn borrowers into buyers.” Omaha World-Herald (Saturday, March 4, 2006): 1 & 2.
If you live in Omaha, and want to check out a copy of Thomas Friedman’s pro-trade and globalization best-seller The World is Flat, it looks as though you’re going to have to wait awhile. While you’re waiting, you may want to read his earlier, and in some ways better, The Lexus and the Olive Tree. It is better in its discussion of the importance of Schumpeterian creative destruction, and better in terms of the coherence and flow of the argument.
See:
Friedman, Thomas L. The Lexus and the Olive Tree. New York: Anchor Books, 2000. [ISBN # 0-385-49934-5]
Friedman, Thomas L. The World Is Flat: A Brief History of the Twenty-First Century. New York: Farrar, Straus and Giroux, 2005.

There is much to like about Voltaire: he defended reason; his novel Candide is hilarious; and he is reputed to have drunk more than 40 cups of coffee a day.

(p. A1) SAINT-GENIS-POUILLY, France — Late last year, as an international crisis was brewing over Danish cartoons of Muhammad, Muslims raised a furor in this little alpine town over a much older provocateur: Voltaire, the French champion of the 18th-century Enlightenment.

A municipal cultural center here on France’s border with Switzerland organized a reading of a 265-year-old play by Voltaire, whose writings helped lay the foundations of modern Europe’s commitment to secularism. The play, "Fanaticism, or Mahomet the Prophet," uses the founder of Islam to lampoon all forms of religious frenzy and intolerance.

The production quickly stirred up passions that echoed the cartoon uproar. "This play…constitutes an insult to the entire Muslim community," said a letter to the mayor of Saint-Genis-Pouilly, signed by Said Akhrouf, a French-born café owner of Moroccan descent and three other Islamic activists representing Muslim associations. They demanded the performance be cancelled.

Instead, Mayor Hubert Bertrand called in police reinforcements to protect the theater. On the night of the December reading, a small riot broke out involving several dozen people and youths who set fire to a car and garbage cans. It was "the most excitement we’ve ever had down here," says the socialist mayor.

The dispute rumbles on, playing into a wider debate over faith and free-speech. Supporters of Europe’s secular values have rushed to embrace Voltaire as their standard-bearer. France’s national library last week opened an exhibition dedicated to the writer and other Enlightenment thinkers. It features a police file started in 1748 on Voltaire, highlighting efforts by authorities to muzzle him. "Spirit of the Enlightenment, are you there?" asked a headline Saturday in Le Figaro, a French daily newspaper.

(p. A10) Now that tempers have calmed, Mayor Bertrand says he is proud his town took a stand by refusing to cave in under pressure to call off the reading. Free speech is modern Europe’s "foundation stone," he says. "For a long time we have not confirmed our convictions, so lots of people think they can contest them."