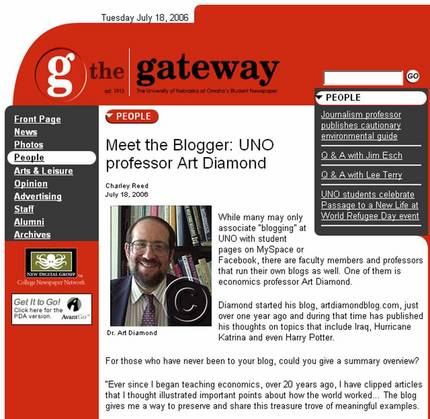 Source of graphic: online version of The Gateway article cited below.

The Gateway, the student newspaper at the University of Nebraska at Omaha, ran a nice feature article on artdiamondblog.com on July 18, 2006, as the first installment of a projected series on blogs created by members of the campus community.

If you click the citation below, you will arrive at the online version of the feature:

For your convenience, the text of the feature also appears below.

While many may only associate “blogging” at UNO with student pages on MySpace or Facebook, there are faculty members and professors that run their own blogs as well. One of them is economics professor Art Diamond.

Diamond started his blog, artdiamondblog.com, just over one year ago and during that time has published his thoughts on topics that include Iraq, Hurricane Katrina and even Harry Potter.

For those who have never been to your blog, could you give a summary overview?

“Ever since I began teaching economics, over 20 years ago, I have clipped articles that I thought illustrated important points about how the world worked… The blog gives me a way to preserve and share this treasure trove of meaningful examples.

“Most of my entries involve government policy issues related to the economy. And most of these entries in one way or another illustrates the problems that arise from the intrusion of government into the free market.”

What caused you to decide that a blog was something you wanted to start up?

“If I am right that the economics profession is currently undervaluing examples, then one way that I can contribute to truth and economic progress (as well as freedom and justice) is to preserve and highlight some of the revealing examples that might otherwise be neglected by the profession.

“The well-known international economist Stanley Fischer is reported to have said that ‘one good example is worth 1,000 theories.’ That may be an exaggeration, but I do agree that good examples are worth a lot: partly as evidence and partly as pedagogy.”

Do you think your position as a teacher at UNO affects what you put on your blog?

“I identify my blog as a ‘personal blog’ to make it clear that I speak for myself, and not for my department or college or UNO. I pay a monthly fee to a small blog-server outfit to host the blog, so that the UNO information technology infrastructure is not used for it.

“I probably write a bit more freely on this personal blog than I would if the blog were maintained and supported by UNO.”

How do you think that blogs have influenced communication in the 21st century and what experiences have you had personally that helped you form that opinion?

“What Amazon does for books, blogs do for news and commentary. The variety is enormously increased, and the gain is in terms of the greater odds you will be able, more quickly and more exactly, to find what you are looking for.

“Almost every day, I use blogs to help me be more productive.”