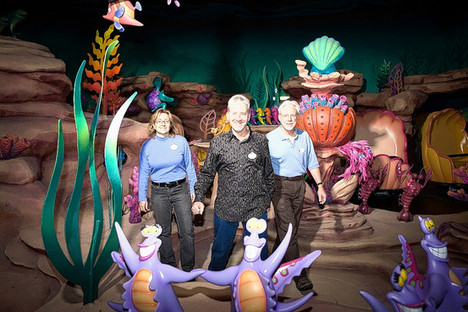 “‘We’re kind of like an old married couple,’ said Imagineer Chris Crump, center, of his longtime colleague Larry Nikolai, right. Lisa Girolami, the ride’s producer, is left. It took nearly four years to conceive and build ‘Ariel’s Undersea Adventure,’ which opened at Disney California Adventure Park last week. The trio spearheaded a group of over 100 designers, architects, lighting experts and other specialists.” Source of caption and photo: online version of the WSJ article quoted and cited below.

(p. C11) It took nearly four years to conceive and build a theme-park ride that put visitors inside the world of “The Little Mermaid,” including several musical numbers, a few key narrative moments and 184 figures from Disney’s animated hit.

And that followed the 18 years it took to settle on an approach to the ride, which was on the entertainment giant’s to-do list almost from the day the film was released in 1989. The ride finally opened last week at Disney California Adventure, Disneyland’s younger neighbor, and takes visitors through a condensed version of the movie’s narrative, cramming nine scenes and four songs into 5½ minutes.
. . .
They start by thinking big: Ms. Girolami described their brainstorming sessions as “an iterative process”–first deciding what parts of the movie to retell, then returning to the drawing table as the decision-making focuses to smaller and smaller details.
Then, helped by “rapid prototyping,” a technology that allows them to generate physical models directly from computer-design files, the group tests and retests their models.
. . .
The Imagineers pride themselves on their never-say-die spirit. “We commit to things creatively that haven’t been done,” Ms. Girolami said. “Someone will say, ‘That’s never been done before,’ and it’s our job to say, ‘Great–let’s do it.’ “