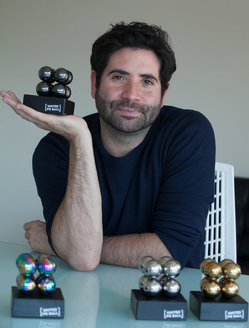 “Craig Zucker, former head of Maxfield & Oberton, which made Buckyballs, sells Liberty Balls to raise a legal-defense fund against an unusual action by federal regulators.” Source of caption and photo: online version of the NYT article quoted and cited below.

(p. B1) Over the last three weeks, more than 2,200 people have placed orders for $10-to-$40 sets of magnetic stacking balls, rising to the call of a saucy and irreverent social media campaign against a government regulatory agency.
. . .
It involves an effort by the federal Consumer Product Safety Commission to recall Buckyballs, sets of tiny, powerfully magnetic stacking balls that the magazines Rolling Stone and People once ranked on their hot products lists.
Last year, the commission declared the balls a swallowing hazard to young children and filed an administrative action against the company that made the product, demanding it recall all Buckyballs, and a related product called Buckycubes, and refund consumers their money. The company, Maxfield & Oberton Holdings, challenged the action, saying labels on the packaging clearly warned that the product was unsafe for children.
But the fuss now has less to do with safety. After Maxfield & Oberton went out of business last December, citing the financial toll of the recall battle, lawyers for the product safety agency took the highly unusual step of adding the chief executive of the dissolved firm, Craig Zucker, as a respondent in the recall action, arguing that he con-
(p. B6)trolled the company’s activities. Mr. Zucker and his lawyers say the move could ultimately make him personally responsible for the estimated recall costs of $57 million.
While the “responsible corporate officer” doctrine (also known as the Park doctrine) has been used frequently in criminal cases, allowing for prosecutions of individual company officers in cases asserting corporate wrongdoing, experts say its use is virtually unheard-of in an administrative action where no violations of law or regulations are claimed.
. . .
Three well-known business organizations — the National Association of Manufacturers, the National Retail Federation and the Retail Industry Leaders Association — banded together this summer to file a brief urging the administrative law judge reviewing the recall case to drop Mr. Zucker as a respondent.
The groups argue that holding an individual responsible for a widespread, expensive recall sets a disturbing example and runs counter to the business desire for limited liability. They contend that such risk would have a detrimental effect on entrepreneurism and openness in dealing with regulatory bodies.
. . .
Conservative legal groups like Cause of Action, a nonprofit that targets what it considers governmental overreach, have been watching the proceedings with interest and weighing taking some action.
“This really punishes entrepreneurship and establishes a bad precedent for businesses working to create products for consumers,” said Daniel Z. Epstein, the group’s executive director. “It undermines the business community’s ability to rely upon the corporate form.”

For the full story, see:
HILARY STOUT. “In Regulators’ Sights; Magnetic-Toy Recall Gives Rise to Wider Legal Campaign.” The New York Times (Fri., November 1, 2013): B1 & B6.
(Note: ellipses added.)
(Note: the online version of the article has the date October 31, 2013, and has the title “Buckyball Recall Stirs a Wider Legal Campaign.”)