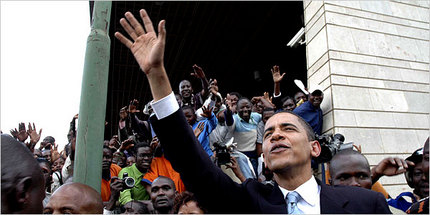 He urged people to reject “the insulting idea that corruption is somehow part of Kenyan culture” and “to stand up and speak out against injustices.”

During his speech on Monday, he laid out a tough prescription for Africa’s ills, calling for government cutbacks, more openness and less ethnic politics.

Kenya is one of the more developed countries in sub-Saharan Africa and one of the closest to the West, but it is consistently ranked by international organizations as one of the most corrupt.  Mr. Obama said this corroded its ability to attract investment, fight terrorism and provide security for its own people.

Most of all, he told Kenyans to stop complaining about the injustices of the colonial past and to accept responsibility.  “It’s more than just history and outside influence that explain why Kenya is lagging behind,” he said.

He ended by telling the crowd, “I want you all to know that as your ally, your friend and your brother, I will be there in every way I can.”

Many in the audience left in high spirits.

“He’s inspiring,” said Miriam Musonye, a literature professor.  “He really seems to believe what he says.”